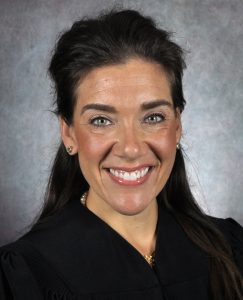 I am a Louisville native and graduate of Sacred Heart Academy, Miami University in Oxford, Ohio, and the University of Louisville, Louis D. Brandeis school of Law. I have clerked on all levels of our state courts, and served as a prosecutor for eight years prior to becoming a judge. I was one of the first prosecutors in the Heroin Rocket Docket working to address the heroin epidemic destroying our communities and nation. I have further worked in our specialty courts including Veteran’s Treatment Court and Mental Health Court, developing lasting relationships with all of our criminal justice partners.  I have committed my professional career to public service and our community. I am honored to serve as your District Court Judge.

© 2021 Paid for by the Committee to Retain Judge Moore, Alex Dathorne, Treasurer